Dodge and the SRT lineup are about uncompromising performance. Period. A gut wrenching, guttural sounding, unguilty pleasure that brings back the golden era of American muscle cars. And the public is drinking it up with relish. All you need to do to double check is to try and buy a Hellcat at your nearest Dodge dealer. The queue is long, the prices are way above MSRP; Dodge just can’t make enough of them to quench the thirst of consumers. The cars have been labeled: “batshit crazy”, “you will kill yourself”, “it will bite you”, etc.

The cars are successful and so have been the marketing campaigns - the Dodge brothers of Wieden+Kennedy and our Beast.

The recurring line of my work with Dodge has been the “spirit animal”: The Hellcat, the Viper, the Demon. 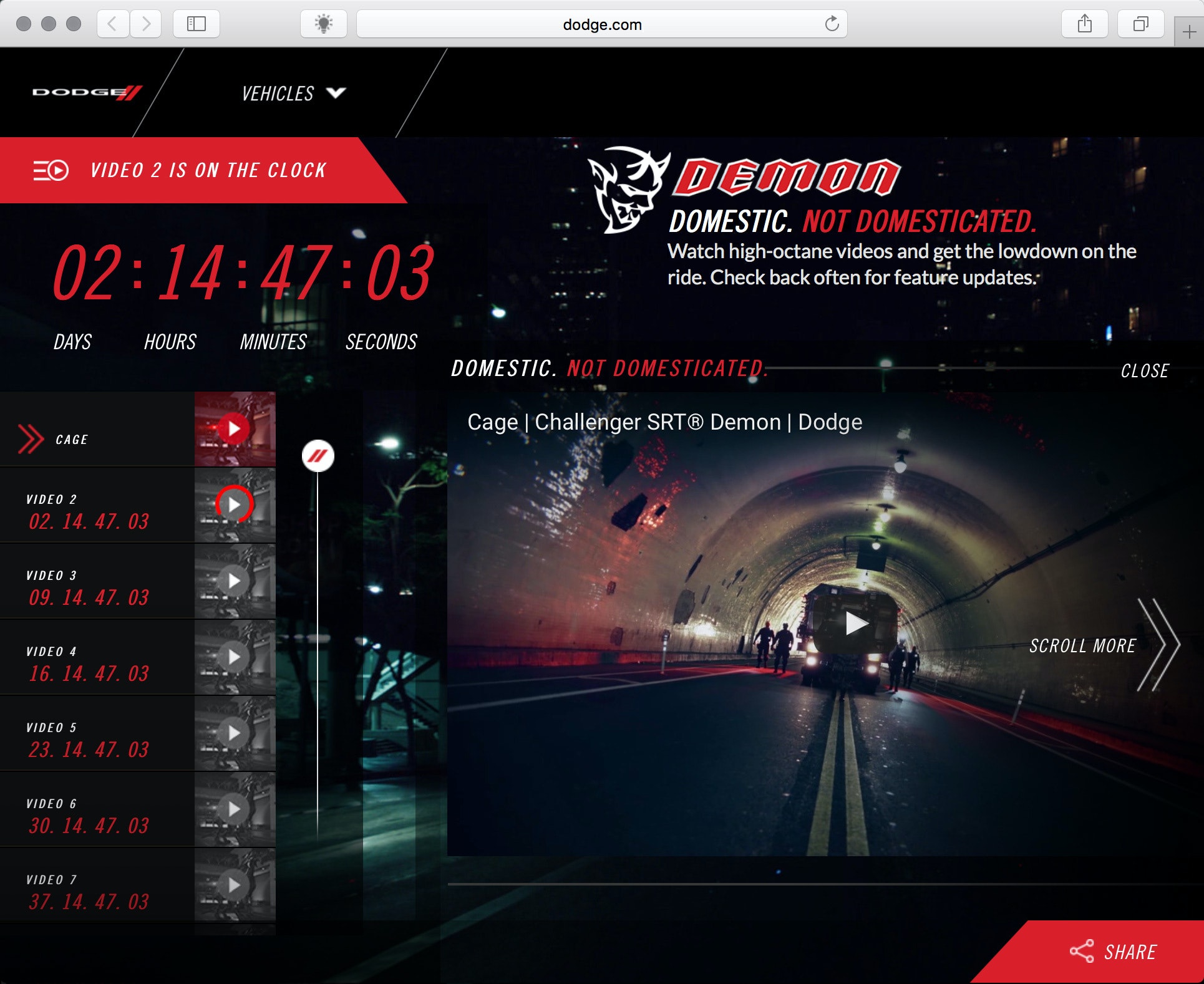 It all started with the idea of bringing to life the Hellcat logo, designing the metaphorical creature that the Charger is. Dodge wanted it to run the streets, literally tearing up the competition; throwing Audis and Bmws' torn husks at the walls. This ended up being tamed a bit by the iron hand of the legal department but the push towards raw and unapologetic was the theme behind all Dodge work. This then took a life of its own in a series of videos, anthem pieces, print, holograms, VR and documentaries.

Some of this work and more made MindoverEye FCA’s agency of record and opened the door to a flux of work for Fiat, Chrysler, Jeep and of course the continuing relation with Dodge.

Concept: the new Dodge Demon runs a quarter mile drag race with the finish line being in front of the iconic Detroit GM building, unabashedly bringing the challenge to the doorstep of the competition.
Backstory: GM is slated to release their new Camaro. Dodge has a comeback ready and it doesn’t want to knock on the door to issue the challenge. It wants to break the door.

Series of videos, exploring features of the car as it running the drag race, released sequentially, with the final video being the anthem for the launch of the car:

VIPER DOCUMENTARY:
Have you ever talked to a 9 year old boy about what his dream car would be? What poster he might have on his wall?
Experiment: Line up a few supercars: Viper, Ferrari, Lamborghini and release a group of 4th graders, see where they flock. The Viper is what real-world Batman drives.

The Dodge Viper is an icon of American design and engineering. It is what kids dream they will own when they grow up and when they see it at the dealership, holding dad’s hand. It was like this yesterday, it is like this today and it will be so in the future. It is identified with rugged men that do not mess around, that like exclusivity the American way.
The story of the Viper itself from the prototype in 1989 to today is one filled with myth and epos. The struggles of a fistful of engineers with a dream.

Another aspect of the Dodge work was the experiential/activation line of work. In the instance of the Super Bowl Playboy party in San Francisco we gave life to the spirit animal in a non conventional way. The look of the party goes as a 2 ton robot Hellcat hologram lunged roaring at them was priceless.

SUPER BOWL BILLBOARD For the Super Bowl itself a 15 sec spot (and a 5 sec cutdown) spots were made for the billboard.

DEALER SHOW DODGE CHARGER UNVEIL
Continuing in the experiential/activation line of work, Dodge asked to blow out of the water the reveal of the latest incarnation of the Charger at its annual dealer show, outdoing the other FCA brands. A cage was designed, that would contain the robotic Hellcat. As it emerged on stage flanked by security officers to contain the beast we see the Hellcat inside tear the cage open and amidst smoke and fire the new Dodge Charger emerges. Let’s just say that it was an unexpected unveil and it overshadowed every other presentation.Below, the concept design of the cage. 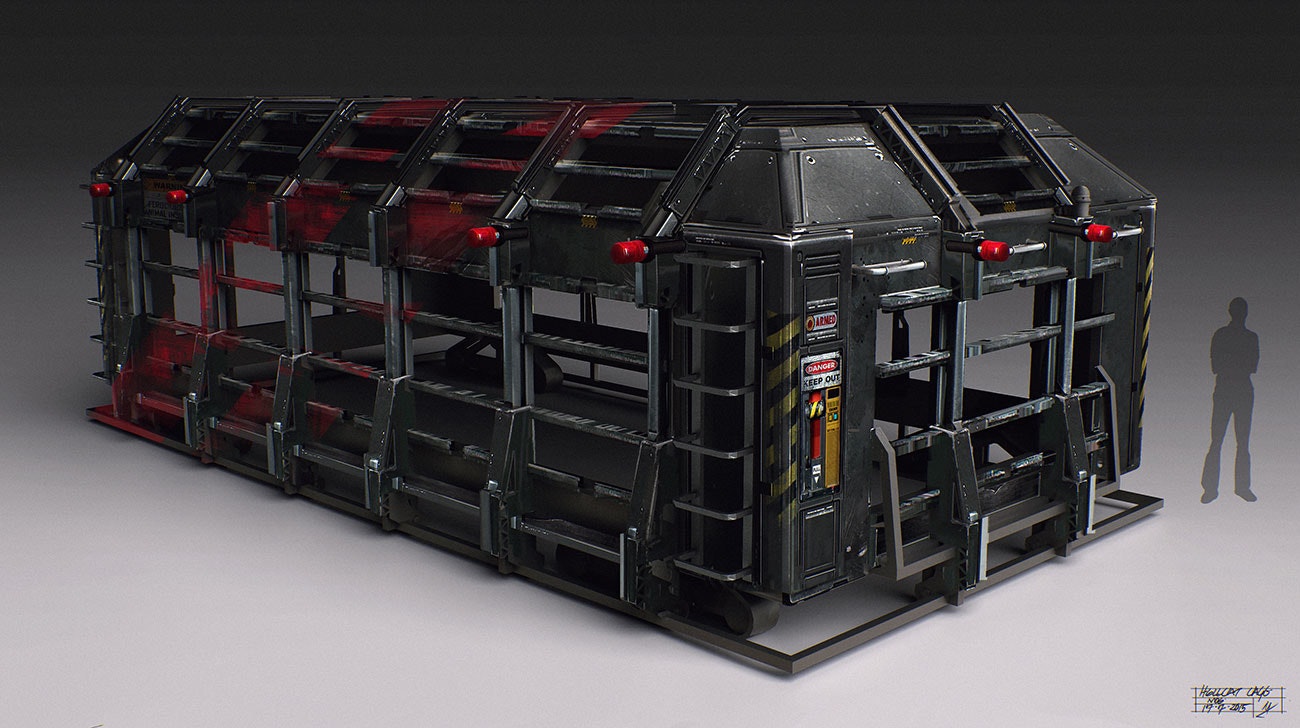